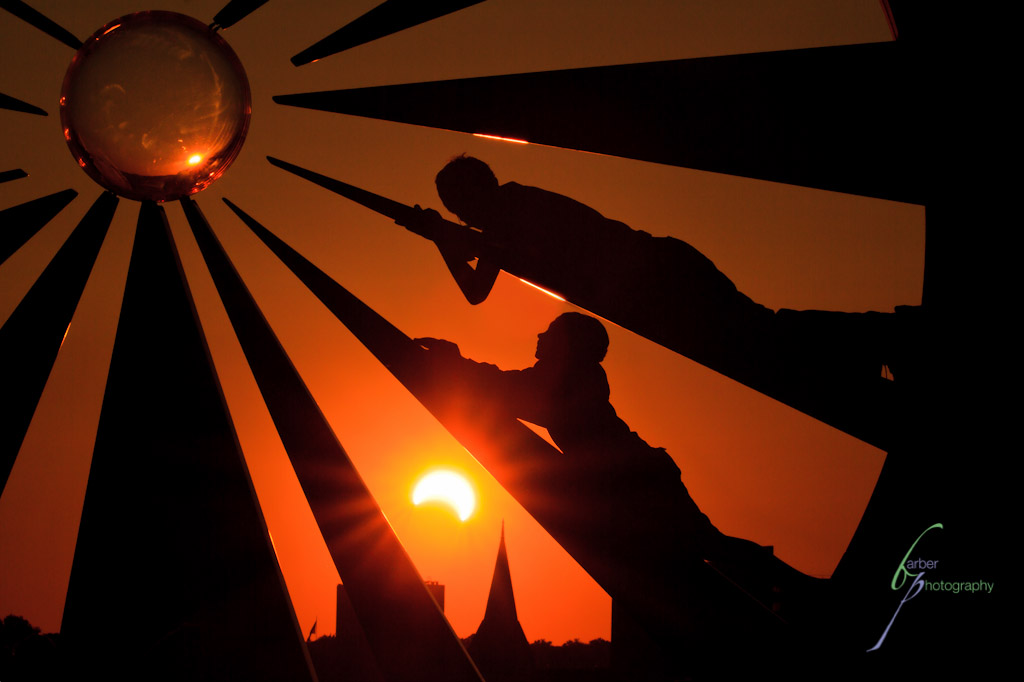 The sun is usually a big, bright light source that doesn’t normally get much attention in a photograph. But during yesterday’s solar eclipse, it got all the attention! Although I went into it not knowing what to expect, I learned quite a bit from photographing the eclipse.

In Des Moines, we  were blessed with clear skies and beautiful weather to see the partial eclipse during sunset. The Des Moines Astronomical Society had planned an event to view the partial eclipse from the same spot I was planning on being – the Iowa State Capital grounds – how fortunate!

The camera you use isn’t the most important thing about photographing an eclipse, but it is a good start. Because you don’t want to look into the sun with your naked eyes, and definitely not with a zoom lens, it is important to have a camera with a “live” viewfinder (like most point-and-shoot digital cameras). I tried to keep the camera positioned so that it blocked the sun and I was in the shadow.

A decent zoom lens is nice to have – the more you can zoom, the bigger the sun will be in the picture. If you are going to be zooming or taking multiple exposures, I recommend using a tripod. This also makes it easy to just sit back and watch the eclipse through the live view.

Location is obviously very important. If you have the opportunity, plan ahead and visit your location at least a day before and see where the sun will be location during the eclipse. Look for anything that will be in the way and also look for foreground elements that can add interest to your photograph.

In this case, I created my “safe” photos from an open spot. Due to the crowds, I set up early to make sure I had a clear view of the eclipse. My original vision was to have the Des Moines skyline in the same photo as the eclipse. That was easier said than done. “Plan B” was to try to get something around “Shattering Silence”, the sculpture overlooking the skyline from the Iowa Judicial Building. As you can see, I didn’t get just the sculpture in the photograph, but I am happy with how the kids playing adds life to this otherwise inanimate scene.

While setting up the camera and waiting for the eclipse to happen, I had quite a few people come and check out what I was getting (including a Des Moines Register reporter who mentioned me in the article he was writing). I happily showed them the back of the camera which, as I have been told, looked better than viewing through the nearby telescope!

The eclipse lasted approximately an hour – plenty of time for some experimenting. Try different exposures and angles. You never know which will be your favorite in the end.