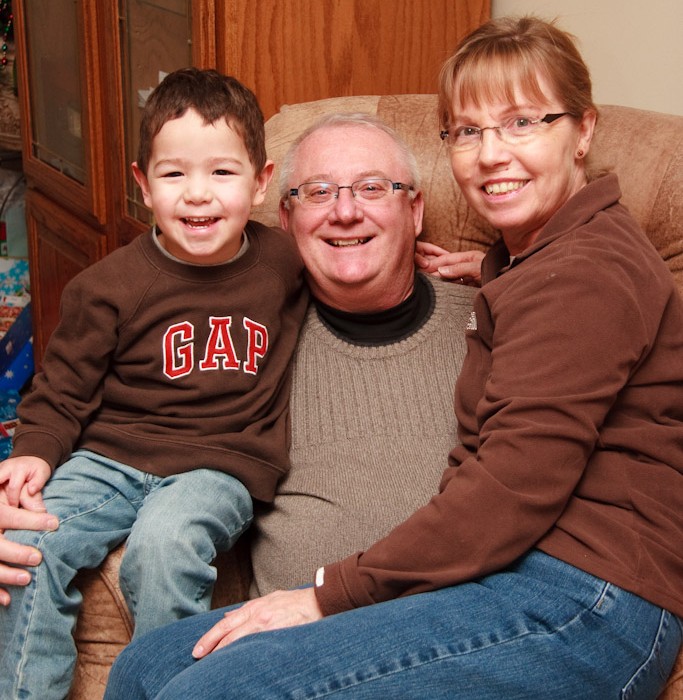 On Saturday, we spent Christmas in Omaha.  Chris and Christy, my brother and sister-in-law, had been snowed in during Christmas at Sioux City so it wasn’t until this time that we all got a chance to get together.  Christmas with Kevin’s family is always fun and relaxing.

Chris and Christy had just bought a Wii and brought it along.  In this photo, Mike and Chris are having a boxing match.

This is Kevin’s parents, Mike and Jackie.  They have one of the strongest marriages I know and I think they really showed their sons a strong example of how to be a great spouse and just how great marriage can be.  I know Christy and I both feel blessed to have such great husbands as a result of having such great parents as role models to Chris and Kevin.

We loved this one of Drew.

Mike and Jackie had taken down their Christmas decorations since it was so far after Christmas but they decided to decorate their plant and put the presents under that.

Here Drew is listening to the Christmas story.

A rare thing.  Kevin and I actually getting a photo together.   Since we’re photographers we usually only get a couple of photos taken together each year.  We were glad that Chris took this of us and he really did a nice job with the composing it.

This was one of my favorite that I photographed that day.  Just love that Kati was in this shirt that day.

Such a sweet moment.